Episode 1121 of Casualty is the 29th episode of the show's 33rd series. The episode was directed by Paul Riordan and written by Chris Lindsay and Nick Fisher. This episode marks the first appearance of paediatric registrar Will Noble, portrayed by Jack Nolan.

Paediatric registrar Will Noble arrives at the ED as a locum and gets on well with the rest of the team apart from Archie. In resus, he treats a boy named Toby who has fallen from a stationary train carriage and doesn't want his mother to find out. Will becomes concerned about his blood not clotting, and Toby's medical records show that he has myelodysplastic syndrome. Once Toby's test results come back, Will insists on calling his mother, but Toby soon figures out that he has developed leukaemia. Toby opens up to his friend Cassie about his illness, and she helps Will convince him to call his mother.

Toby's mother Jackie soon arrives and tries to take control of his treatment, but he insists on doing it his way and insists that she goes home to take care of his brothers. As Will takes Toby to the lift for his chemotherapy session, he promises to join him once his shift ends. Later, Connie informs him that there is a vacancy for a full-time consultant post, but Will declines, asserting that "the locum life suits [his] current situation". Archie reminds him that he was supposed to keep Toby company during his chemotherapy, and Will rushes to the wards. To Will's dismay, Toby's session has just ended, and he insists on being left alone. As Will leaves the department, Archie admonishes him for his irresponsibility, prompting him to go to Connie's office and apply for the consultant post.

Elsewhere, concerned about her symptoms manifesting, Charlie tasks Duffy with handling paperwork. The department begins to struggle with understaffing, and he is repeatedly asked for Duffy's assistance, but he insists that they can cope without her. However, he starts to crack under the pressure and snaps at Robyn when she asserts that she needs Duffy's help. Later, Charlie thanks Duffy for her work, but she tells him that he's making her look bad. He tries to motivate the nursing staff to work hard to overcome the issues caused by understaffing and stretched resources, but Jade questions why Duffy is allowed to go home early. Charlie berates her and tells the rest of nurses to get back to work.

Meanwhile, Gem informs Ruby and Jan that Iain will be able to go home soon, and thanks Ruby for saving his life. 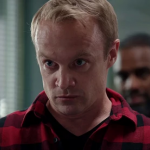