In the Holby Ambulance Service, Kathleen "Dixie" Dixon was the Operational Duty Manager until 2016, with Iain Dean working as a regular paramedic. Jeff Collier worked as a paramedic for Holby from 2007 until his death in 2014. Tamzin Bayle also worked as a paramedic for Holby but left in 2014 as a result of Jeff's death. Dixie left the service in January 2016 to go and live in Cornwall, leaving Iain on his own. However, a replacement arrived in March, Jez Andrews, who had only qualified the previous month. Jez left the service in August 2017. 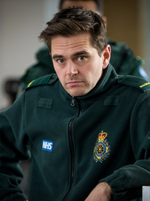 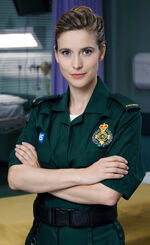 Sam Nicholls
Paramedic
Add a photo to this gallery
Retrieved from "https://holby.fandom.com/wiki/Paramedic?oldid=55431"
Community content is available under CC-BY-SA unless otherwise noted.