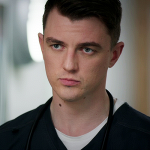 Clinical Lead Consultant
18,788 Edits since joining this wiki
March 20, 2014
5 Discussion posts
lythronax
Administrator
Bureaucrat
83,454 / 104,275
Hello there
I'm Lythronax - Holby Wiki's administrator and bureaucrat. A lot of my jobs are the same as any other editor; my main task is to keep the wiki detailed and up-to-date. However, unlike your standard editor, I have access to tools which allow me to maintain order, such as the ability to change the wiki's appearance, protect articles and block users. I also operate the wiki's Twitter account.
Me and Casualty
As a young child, I usually spent my evenings playing games or watching children's films. However, one Saturday night in August 2008, I decided to spend the evening watching the television with my parents, and they happened to be watching Casualty (specifically "This Mess We're In - Part One" - the penultimate episode of series 22). I'm not sure how or why, but I instantly became obsessed with the show to the point that I considered becoming a paramedic when I was older.

In early 2009, I made it to the front page of my local newspaper after I used the skills I learned from episodes of the show to prevent my younger brother from choking on a small ball. The production crew caught wind of my story, and I was sent signed cast cards, a shirt, scrubs, a letter written on behalf of Oliver Kent and a handwritten letter from Michael French (Nick Jordan). That was pretty neat.
My rankings
Favourite characters

Retrieved from "https://holby.fandom.com/wiki/User:Lythronax?oldid=102624"
Community content is available under CC-BY-SA unless otherwise noted.